BLOG: noun.  A regularly updated website or web page, typically one run by an individual or small group, that is written in an informal or conversational style.

BLOGGER: noun. An individual that writes and/or contributes to a BLOG, a/k/a Bill Georato. 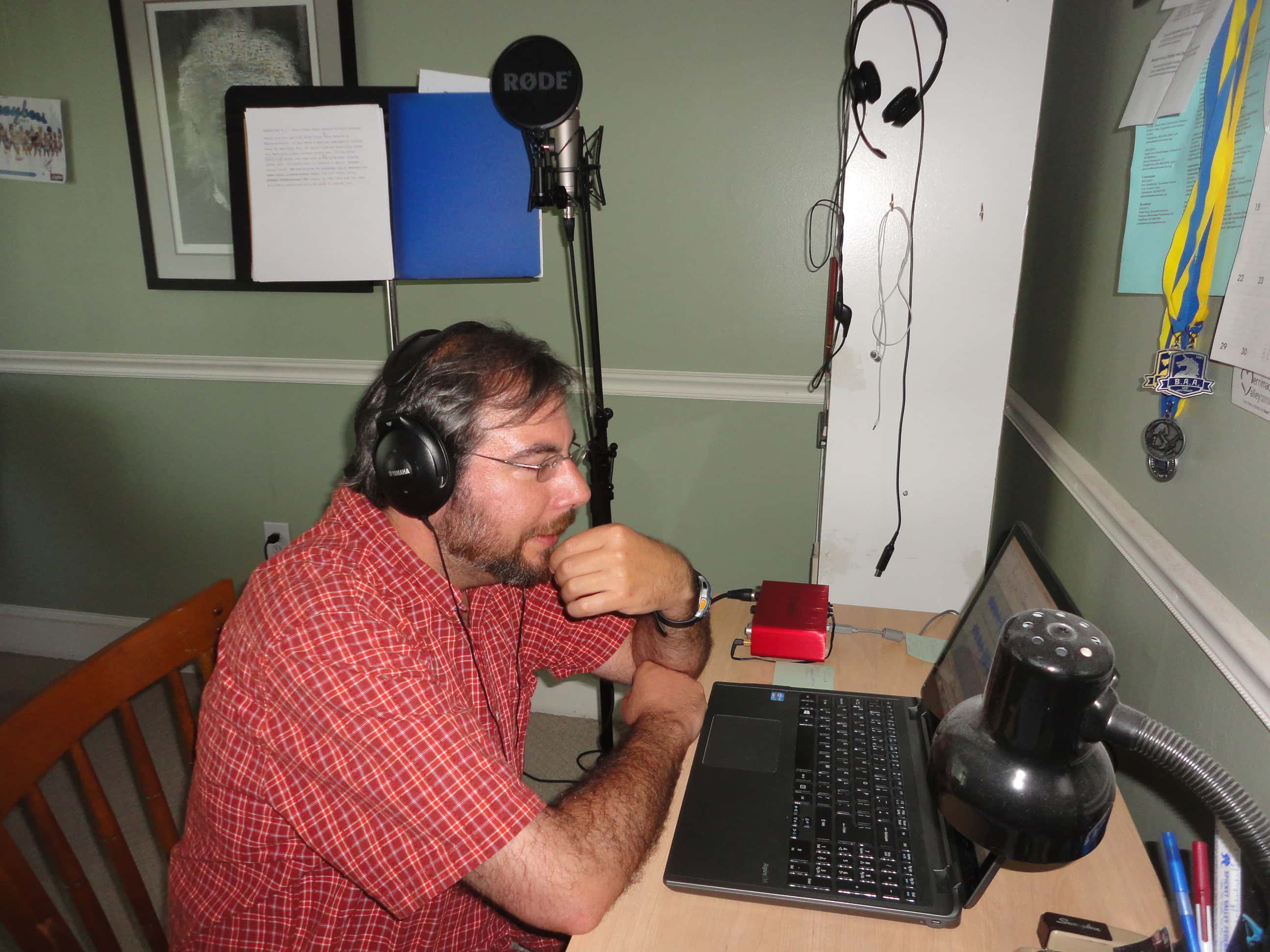 Meet Bill, a fantastic voice student that I was fortunate enough to coach and produce.  While well on his way in the voice industry, he has now published his first book!  Read and enjoy his journey.

With a degree in Science Education, Bill taught school for a couple of years and then went into the business world.  Taking various jobs in the telecommunications industry, he arrived some 15 years ago at Blue Cross Blue Shield of Massachusetts.

He never lost touch with his creative side, however, pursuing writing and then voice acting.

He tells us that he’s enjoyed writing his entire life. In high school and college, his  favorite assignments were research papers and creative writing projects. One of his first works was a short story from high school called “Joe Garland Investigates: The Case of the Missing Santa,” a modern take on the old pulp fiction mysteries of the 1940’s.

In college, he took additional writing classes, one of which had a unit on poetry. And while he admits that poetry is not his favorite style of writing, song lyrics aside, he did well in the class.  So well, in fact, that he submitted two of his poems –“Why?” and  “Ode to Captain Kirk”— to the Writer’s Digest Writing Competition.

“Ode” won honorable mention.  He’s allowed me to share it with you.

Captain Kirk, what a man.

Played as only Shatner can.

Travelling the universe in the Enterprise,

He was the apple of all the girls’ eyes.

With Spock and Bones and the rest of the gang.

Then one day, he entered the Nexxus,

Where he was taken away from us.

He died alone, as he knew he would,

Although Picard did all he could.

When you join Starfleet sometimes death is a perk.

Prior to writing his book, a lot of his blogs were reviews and his procedure for writing them was quite simple.  He thought about content for a couple of days, wrote the foundation in his head, then sat down at the computer for about two hours, and completed the process.

When asked about his best kept secrets for blog or book writing, he tells us that, “You must be excited about your subject.”  Drawing the comparison to voice acting, he says that just as an audience can tell if you’re simply “going through the motions” when delivering copy, so can a reader.  So be genuine, authentic and engaged.

Another superb tip he shared for blossoming writers is to not be afraid to let other people read your stuff and don’t be afraid to walk away and clear your head should writer’s block threaten you.

While Bill chose to edit his new creation himself, he says that may have been a mistake.  He recommends having someone else look at it and then compare notes.  After editing, he decided to publish on Create Space (Amazon) and explains that it was quite simple to upload the text, create the cover, and approve the proofs before it went to press.

The single most important thing that he wants the reader to take away from reading Dude With Thoughts: The Book is to feel good, have an enjoyable reading experience, maybe some laughs, and also learn a little something new – because there are so many different subjects contained in one place.

Fortunately, Bill is still finding time to pursue his voice-over career.  With over thirteen audio books recorded, video game related and video game Mindcraft projects, he is also planning a future writing project about his 2016 summer cruise to Norway and Denmark, a collection of Joe Garland mystery short stories called The Complete Joe Garland, and a children’s coloring and activity book, which he will also illustrate, called Joe The Fish.

Supremely aware of the importance of social media, he remains vigilant in keeping his name, voice and written works well publicized.  Check out his links below!

DWT Voice Productions (my business site) – The Company Store page has all the Amazon/Audible/iTunes links to the audiobooks, and the Books By Bill page has the links to Dude With Thoughts: The Book.

You can also visit Bill’s official Facebook, and be sure to check out the Dude With Thoughts Blog.