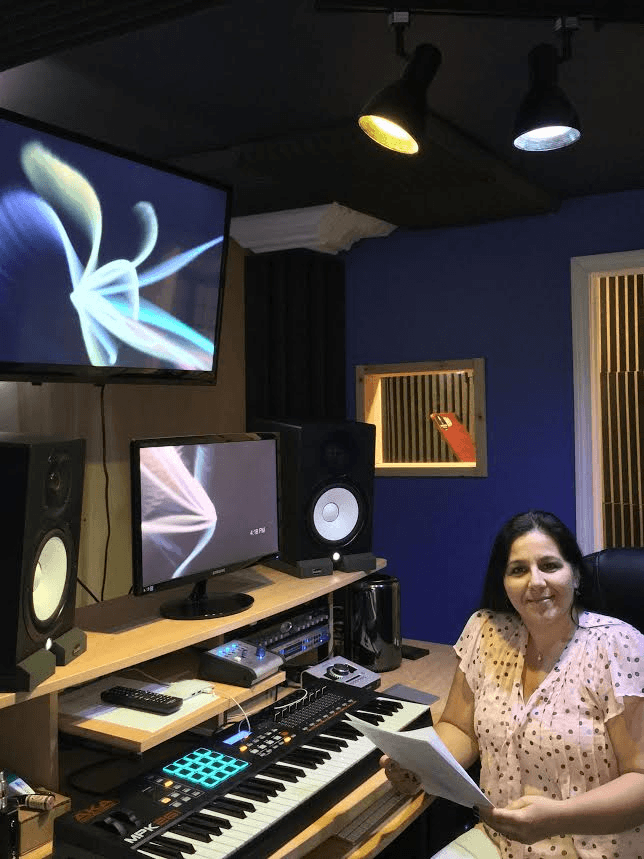 Today we want to showcase an extremely diverse individual: Drita Protopapa. Hailing from Boston, Drita is a child of Albanian and Estonian immigrants who grew up in quite an international household. Her childhood was full of international family and friends, performing arts, and languages, which led to Drita cultivating a love for music and theater. After attaining a degree in Latin American Studies, and with it, fluency in Spanish, she happened upon the voice-over world. She has been successful since.

SAV: You have such a diverse background! How did you get your foot into the voice-over door?

DRITA: I moved back to Houston after college in the early 90’s, and reconnected with my Latin American Theater professor from college. She was heading overseas to Chile to direct the university program there, and her talent agency desperately needed a female, Portuguese-speaking talent to do a very interesting gig: a voice-over for the International Space Station/NASA! Guess who got the gig? Me! I really had no idea what voice-over was, or what I was getting myself into, but being a “yes” person, I accepted and went full-steam-ahead into the session. I guess I figured that my language and performance background would carry me through … and it did! I immediately fell in love with the field and started doing voice-over work here and there for the agency in Houston.

DRITA: I had two small children at the time I started, and a full-time job working as the minority student recruiter for the Baylor College of Medicine MD-PhD Program, so I did not have a lot of room for anything extra.

After moving back to MA in the early 2000’s, my career took a big change, and I started working in the translation/interpretation industry. This experience led me to open my own agency in 2007, MAPA Translations and Language Solutions, and eventually added multilingual voice-over as one of the many services that we offer. As I was busy growing the agency, voice-over took a back seat, personally, even though I continued to book jobs and take on new clients over the years. In 2015, the agency was going strong, and had a steady stream of income so I decided to focus on voice-over and, specifically, on my own voice-over career.

SAV: So how did you discover Such A Voice?

DRITA: I set out with a goal to gradually move toward just doing voice-over and finding someone to take over the day to day management of MAPA. Shortly after I made this decision, I secured an outstanding project manager and interestingly came across an email that was advertising a voice-over info session hosted by Such A Voice in Framingham, MA right in my backyard. I decided to see what the folks at Such A Voice had to offer! After attending the session, I decided to sign-up for the premier membership and, shortly thereafter, started doing one-on-one coaching sessions with Steve Wahlberg. Within 6 months after learning about Such A Voice, I was ready to hit the road running; I had been professionally trained, and had my commercial and industrial voice-over demos (English) with SAV ready to be used for attracting new voice-over clients.

SAV: That’s fantastic! So what have you been doing since?

DRITA: For the past year, I have been the voice of the Florida Blue phone system (English) and for the past two-and-a-half years have been the bilingual narrator (English and Portuguese) for the PGA Tour Latinoamerica golf web series (9 episodes per year). The majority of my voice-over work to date has been industrial with a focus on educational, medical, and eLearning. My goal in 2016 and beyond is to do more commercial work, and to build on my skills by adding training for audiobooks, character voices, and hopefully animation too!

SAV: PGA is certainly a big deal. NASA and the ISS sound amazing, too. What has been your favorite voice-over job?

DRITA: My favorite two voice-over jobs to date have been the PGA work and a radio spot I did for a west coast gas company. The PGA gig is challenging as the session is long, and the copy has challenges because of the names of the players, the tournaments, and the locations that tour goes to; but I love the challenge, and the people from PGA are great to work with. The reason why the radio spot is also a favorite is because I was challenged to really put my acting skills to good use, and have as natural of a girl-next-door tone as humanly possible! I guess I just really like a good challenge!

SAV: And what about the future – do you have any dream voice-overs?

DRITA: I would love to be the voice for all of the organizations and companies I feel strongly about… maybe most importantly, I would love to voice documentaries and/or promos for work being done by relief agencies around the world. I feel that my voice could really be a part of making a difference in those cases.

SAV: You record in both English and Portuguese. Are there any challenges you face when doing either? How do they differ when you’re in the studio? For instance, do you have to do more takes in one?

DRITA: Overall, the challenges are the same in terms of the voice acting itself. The major difference for working in a language other than English is that it usually takes longer to say the same thing in that other language so you end up having to do some in the booth editing and tweaking to get things to work out right timing-wise! I have found that even if the audio engineer is not familiar with Portuguese, they are still able to keep up with me and figure out what is going on based on context and tone, but that can be another source of needing extra time to explain things that might be obvious if we were recording in English.

SAV: Do you ever get tongue tied?

DRITA: Absolutely! I always tell people how amazing I think the brain is, especially the brain of voice actors! I think it’s incredible we don’t get more tongue tied than we do, the brain is processing several things at once and trying to produce sounds that not only match what is on the written page, but that also have the right tone, volume, inflection, and so on. I find that I usually get more tongue-tied the more tired I am or the longer the session goes on because your brain starts to get tired and the processing speed slows down quite a bit.

SAV: What words of inspiration can you offer to someone who is thinking about getting into voice-over?

DRITA: The main thing I would tell them is to think long and hard before embracing this career; it’s not just about a “nice” or unique voice! Voice-over is a business and so much of it has to do with more than your acting or vocal skills. It has to do with HOW you run your business, how you market yourself, and how you interact with others in the field. Now that I have the perspective, and the additional training from SAV, I can confidently say that this is serious business, and for the folks who are dedicated to the profession and willing to put the effort and financial investment into it, they will most definitely have positive results.

If you have completed your demo then you are eligible for our Talent Spotlight! Every month we will choose one Such A Voice alumni to post about and, if chosen, you will receive 3 free months of our VIP Membership! Send a picture and why you feel you should be featured to: skye@suchavoice.com.