Growing up, my father worked part time as a radio DJ. Ever 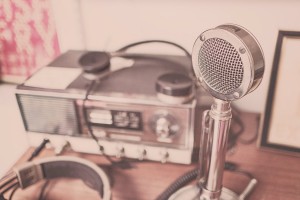 y Saturday night, his voice could be heard here in Vermont on The Point, an independent adult rock station. I didn’t always listen to his show but my mother often had it on in the background, the soothing presence of my father’s voice coming over the FM waves.

During the week, he would read novels to my brother and I before bed. I loved these times he read to us, but his voice didn’t ever strike me as special. After all, it was just my Dad. As I grew older, however, I realized that my father had something of a cult following. It was partly his musical taste and depth of knowledge, but also, people loved his voice. They would tune in to hear his show every Saturday night and would tell me as much when they learned that I was his son. It was something I hadn’t considered: my father had a gift.

As I grew older, people started telling me that I had my father’s voice. They couldn’t tell us apart on the phone. It was amusing at first, but as time went by, I began to wonder. I started concentrating very carefully on other people’s voices. I wanted to know what made our voices different from theirs.

Today, when people ask me who my favorite voice-over artist is, I normally think of Sir David Attenborough or H. Jon Benjamin, two unique voices that I admire for different reasons. One is a once-in-a-lifetime narrator, the other a comedic genius. Through my work over the years, I’ve had the privilege of hearing many incredible voices and learned a massive amount from the artists that I’ve met. There are so many great voices to be heard. That said, I’ve realized that truthfully, my father’s voice is my favorite. And I got my own voice not just from his genetics, but by listening to him.

So often, voice-over artists think that their gift is purely their voice, but to me, the best voice-over artists are the ones who value their ears as well as their tongue. In order to capture a great voice, you must also be a good listener. I think sometimes of a framed piece of needlepoint that hung in my childhood bedroom. My paternal Grandmother had made it before I was born and as a kid, it meant little to me. It was an intricate piece that depicted a chipmunk at the foot of tree surrounded by flowers, and it read, “The Earth has music for those that listen.” Finally, I get it. It took me years just to begin listening. It took recognizing my favorite voice to teach me how. I have a long ways to go, but I hope that the next time you hear your favorite voice, you stop to listen as well.

Did you enjoy this post?  Dig even deeper into topics like this in our VO Pro Membership program.

Max Pogacar is a voice-over artist and talented musician. Born and raised in Vermont as the son of a popular radio DJ, Max has always felt at home behind the mic. Working with Such A Voice to take his passion for performance from the stage to the studio, Max has found true success in the world of voice-over.