Here at Such A Voice,we bring together some pretty incredible professionals from all different parts of the world to provide our students with a top voice-over education. Our staff members have such a wide variety of backgrounds and unique personalities. From working VO actors starring in movies, video games, and national TV commercial campaigns, to producers spending their days working on voice-over demos as well as broadcast voice-over work, to copywriters, casting directors and many other industry skills in between! We genuinely love bringing our expertise and our experiences together to create the best programs for our students.

For this week’s spotlight in the series, we’d like to introduce you to one of our coaches, Rosemary Chase. 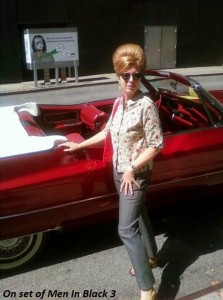 SAV: We’d love to hear who Rosemary Chase is!

Chase: I’m an honest, hard-working New Yorker (I’ve lived in Manhattan for 30 years now), with a comedic, fun-loving personality. Essentially, I’m an artist. It’s not just what I do, it’s me. I’ve been a working artist 90% of my entire working life.

SAV: In addition to voice-over, you also do on-camera work. Can you tell us a little bit about your work in the market?

Chase: Well, I love being on set, and I tend to feel a bit cranky if I’ve had too many days away! I fell into the acting business, meaning it wasn’t planned out. But ever since my very first (then non-union) background job in Mr. Popper’s Penguins, I loved every part of it. The only part I had to learn to like and appreciate was auditioning. That is a skill-set in itself. I’m getting better though, like in voice-over, practice is a key component! I do background, stand-in, and body double work. I’ve been a principal in a few projects, and I’ve been featured many times as a named character, which means you are part of the scene and working with principals, but you don’t have any lines. I’ve been in numerous network TV shows and films. I also enjoy working on SNL (Saturday Night Live) and reality TV, such as HGTV’s Flea Market Flip, Season 6, Episode 5. As a contestant, I was able to combine my on-camera and improvisation skills with my background and education in design.

SAV: How did you get started in voice-over?

Chase: In 2012, I attended a SAG-AFTRA Union event [Screen Actor’s Guild-American Federation of Radio and Television Artists] to voice-over. At the event, I purchased a book called “Secrets of Voice-Over Artists,” by Joan Baker. While reading, I discovered I knew one of the featured arts and radio personality, Valerie Smaldone. I read that she taught a VO course at the School of Visual Arts in Manhattan. Before I signed up, I took a 4-hour “VO Exploration” workshop in Manhattan, which gave me a detailed assessment of my voice and reads. The results inspired me to sign up for Valerie’s class. She produced my first commercial demo. I booked my first job off this demo, meaning the client listened to my demo and hired me through the producer. There was no audition for the actual project. I played a female voice greeting for a drive-in movie theatre. It was a pretty, long two page script! I landed this opportunity through a Facebook connection. Funny, in a way, I believe my very first VO job was at 16 years old! Working for a large department store, part of my job as a switchboard operator was making announcements over the loudspeaker! I remember I loved being on that mic!

Chase: I’m a walk-a-holic! I walk six miles easily, at least four times a week. Sometimes I’ll do as much as 10. I love it! And sometimes, with the help of my cell phone, I can work while I walk.

SAV: Are you a night out, or evening in person?

Chase: Although I love going out for dinner, I’m a morning person, up by 7:00am, whether I’m going to be on set or not. If I have plans, say to hear live music, I may stay out much later. If I do, this will be my only late night out for the week! I like Ben Franklin’s quote, “Early to bed, early to rise, makes a person happy, healthy, and wise.” Evenings in spent watching movies, especially during the winter, is one of my favorite things to do.

Chase: Swimming in the ocean. Hands down!

SAV: What do you like the most about voice-over, and the least?

Chase: The art of VO thrills me. I love working toward a subtle, compelling expression based on authenticity. In any art, when you are green, you put on way too much. As you mature in the craft, you are able to see how less truly is more and make every choice count. What I like least is getting a cold!

SAV: Who is your mentor?

Chase: My virtual mentors are Frank Sinatra, Peter Coyote, and Joyce Meyer. And I have a new mentor (in secret) that I met recently at a VO workshop. She’s a female VO artist who rules in commercial and audiobooks! I have to say that SAV staff members Heather Costa, Craig Spear, and Angela Castonguay are also my virtual mentors. It’s really hard to pick just one!

SAV: What is your favorite thing about being a voice-over coach?

Chase: Inspiring others to push through, helping students discover who they are through their voice, and witnessing their growth.

SAV: What advice would you like to share to voice-over talent just starting out in this industry?

Chase: This comes to mind immediately, because I was guilty of this myself, do not fall in love with your voice. The surest way to stay in “announcer-land” is to work from the outside. Go in and your voice will follow. Your pretty sound means nothing without the heart behind your reads. Find yourself and be the unique you that clients are looking to hire. And also, practice regularly!

Watch Rosemary’s voice come to life as “Theodora the Cow” in Pup 2 No Good.