Voice-Over Lingo: Ten Words To Know About The Voice-Over Industry 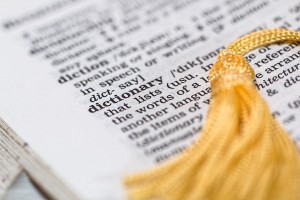 Voice-over: First we need to answer the question, “What is a voice-over?” A voice-over is defined as any recorded voice where you don’t see a face doing the talking. So, think about cartoons, documentaries, audiobooks, or even when you tune into the Super Bowl each year and listen to the exciting, funny voices in the background of each commercial. A voice-over often further emphasizes a visual story.

Niche: In the voice-over industry, a niche is a particular area that is suitable for someone based upon their voice. For example, a voice-over artist may recognize that their voice aligns more for the voice of an animated character rather than the voice of an audiobook. As you continue to develop your voice-over skills, you will begin to find what speaks to you and what your niche is.

Promos: Promos are considered a niche. They are defined as promotional commercial spots used by television and radio stations. Promos are used to increase audience awareness of any upcoming programming.

Read: You may be asked by your voice-over coach to do a read of two lines in the script you’re working with. In this sentence, read is used as a noun and is referring to your read, or version, of the script. This is often interchangeable with the term, “take.”

Demo: A demo is an audio recording of your professional work that is presented to prospective clients. Having a demo as part of your portfolio is a necessity in promoting your talent as a voice-over artist.

Home Studio: A studio is where all the recording and the mixing takes place. One of the benefits of being a voice-over artist is being able to work from home. Many VO artists create their own home recording studio in the comfort of their own home. Creating your own recording space provides convenience and comfort.

Track: A track is the actual audio piece being recorded. VO artists may also hear the term, “multitracking,” which is when you have multiple tracks that will be combined to produce a full, finished production. These tracks may contain music and other sound effects.

Music bed: The music that is added to your voice-over to produce a finished product is called a music bed.

Cut: Voice-over artists will also learn about the audio editing process. When a cut happens, this means a specific sound segment is being removed from the voice-over recording.

Copy: A copy is the script you are working with.

These ten words are just a few that you will come across on your way to becoming a voice-over artist. You should continue to learn as much as you can about the voice-over industry, and of course, keep practicing your vocal techniques! Before long, these words will be a part of your everyday vocabulary.