An animation recording session is slightly different from other voice-over genres such as commercial or narration. Aside from the fact that you are using many different vocal resonators and varying pitch(depending on the character and voice you are bringing to life) there are also technical aspects to be aware of. Let’s get into them! 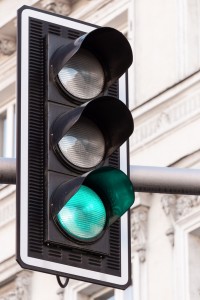 Timing is very important in animation, especially when something has been animated first, and/or is being recorded in one language from another (I.e. in anime when the original was Japanese and you are recording an English dub). There is one technique that lines up three beeps which are played through the voice over artists headphones to cue the actor to start speaking with the on-screen animation. Sometimes, there is a monitor in the booth with the images of the characters on screen. It’s important to view the facial expressions the animators have created since it can inspire and inform your read as an actor. I have been the culprit of “jumping the beeps”, getting so excited that I start speaking too quickly after the third beep. You want to take a deep breath and wait for that third beep to finish, and imagine a fourth beep to come in on where your character starts speaking. This technique is often used for ADR (Automatic Dialogue Replacement) which is another voice-over genre.

“Flap” is the open and close motion of the animated characters mouth on screen. Animators and scriptwriters work together to match the flap to the timing of the voice actor’s lines. If you are lucky and work with wonderful engineers, they are on your side and can slightly compress the timing of your read to match up to the character’s mouth flap. However, you can’t count on this, and it’s best if you perform with accurate timing. You need to be aware of the timing you have for any given line, take note of the “mouth flap”, and make sure your line matches with the mouth flap of your character.

Next to each of your character’s lines, there is usually a timestamp. This tells you how your line matches up to the animation and the length in minutes/seconds of your line. While you shouldn’t obsess over this timestamp, you need to have an awareness of the length of time your line should take and stay within that ballpark. The director will assist you by saying something like “you have a bit more time on this one so [fill in a note on characterization]”. This is why a musical ear or mindset can be helpful, since timing is such a crucial element to animation and voice-over.

If the character you are voicing has been animated with big eyes and has been described as a sweet, energetic, young person – use that in your character development! Physicalization is so important in voice-over, and animation is no exception. We often don’t have time to mull over character ideas for voice-over, especially in an audition. Unlike the theatre world (where I personally began my training) we don’t have a table read to discuss characters and intention for days or weeks. In terms of timing, you need to be able to work with the on-screen animation or image you have been given and use facial expressions and physicalization that reflect that character instantaneously. Timing is important in sessions, so have your toolbox of vocal resonators, facial expressions, pitch variation, and physicalizations at the ready.

Animation is such a fun and creative art form, but like any artistic medium such as music, ballet, or painting, you need the technical foundation to be able to exercise true freedom and creativity. Keep in mind you are collaborating with a director, animator, scriptwriter, and an engineer to make this project a success. You are certainly not alone in the process, but keeping all of these elements in mind will lead you to a productive voice-over session.