Every time I approach a script, I tend to go back to my stage acting roots. 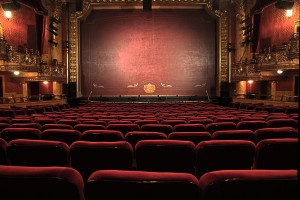 All the world’s a stage – including your VO booth!

On-stage there is a set, a costume, and an audience (and perhaps the kind of applause that would make us addicted to acting in the first place).

In my booth there’s…foam and maybe a green apple (and hopefully silence).

Yes, as a voice actor, we are responsible for imagining everything. And I’m not just talking about the story and the stakes – we’re creating the audience, the set, even our scene partner

So today for Working Wednesday, I wanted to discuss how I try to bring a little bit of the stage to my voice-over booth. And just because I don’t have room in my booth for a ceiling full of lights and rows of cheering fans, doesn’t mean I can’t take some time to picture those elemental things that make stage acting so vibrant.

Using a faux audition, I’m going to walk you through to see how you can apply some stage-acting habits directly into voice-over. To follow along, here are a few of the things we are going to imagine/visualize… (To see the script, please follow along with the video portion)

Costume: When going through animation and interactive auditions, I try to picture myself as the character— in the case where I don’t have an image, I try to alter my posture to reflect the character— I sometimes refer to it as “wearing” the character.

Setting: I picture the place I am in. If it’s a coffee shop for a commercial, I try to hear the sounds of people chatting, muffled Kenny G, and smell the rich notes of ground coffee in the air.

Scene Partner: The person or persons I am talking to in a scene, keeping in mind how far they are from me, if that proximity changes, etc.

Audience: I prefer, when I can, to audition in person, that’s just the stage actor in me. I think things tend to pop with an audience at the receiving end of them. Maybe it’s an energy thing, or maybe it’s just the fact that you can actually see what is “landing”, but when it’s an “audience of one” and you are recording alone, don’t be afraid to shake it out, let it go, and aim for what your instincts say!