The Secret Source for Practice Dialogue for Video Games

When I was a kid in the ‘70s, when people thought of making money with your voice, they thought of two things: radio DJs and Mel Blanc. Radio announcers were smooth and booming, and we knew the voices for cartoons came from somewhere, but, other than Mel, most of the people providing voices were largely unknown.

Plus, video games just went “beep beep beep.” Pong was pretty much it for a while.

Now, of course, the games are much more advanced. As a comedian friend of mine says, “If you got a time machine and went back to 1979 and showed a pong player what video games look like today, the pong player would be more impressed with the video game than the time machine that got you there.” 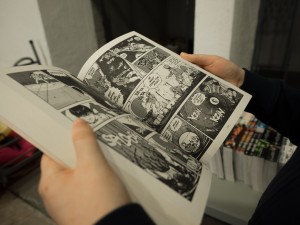 Not to give away the plot completely, but the secret is comic books!

Voice-over for video games is an expansive, fun, and potentially lucrative field for voice actors. Like all other subcategories of voice-over, getting the attention of the casting director for games requires a good, solid demo – and finding scripts for video games can be challenging.

The good news is that I know a secret weapon in finding scripts that sound like video games and that secret weapon is easily accessible to most, if not all of us.

Video game writer and director Kal-El Bogdanove has written that most characters in video games fall into eight archetypes: The Leader, The Rogue, The Pale Rider, The Weak Protagonist, Strong Crazy, Weak Crazy, Strong Antagonist, and Crazy Antagonist. If you think about the games you play, you may find some of your favorite characters fall into these archetypes.

Obviously, you don’t want to just copy the verbiage of, say, Solid Snake, and you want to find some scripting the casting director has likely never heard before. So, where do you find the words to put into your carefully created characters’ mouths so you can build a quality video game demo?

You can pull lines of dialog right out of those little word balloons to build a video game demo by finding a corresponding character to those eight archetypes.

The Leader is the confident, effective, decisive character that the other characters rally around. Sure sounds a lot like Captain America in the Avengers movies, doesn’t it?

The Rogue is the upstart who is good at what he does but often plays by his own rules. Hot-headed but confident in his abilities to get the job done. Consider Green Arrow or Hawkeye. The best example I can think of for The Rogue is Han Solo, who has been featured in comic books since 1977 as well.

The Pale Rider is the grim, gritty, lone-wolf who works best alone and has no time for others. Batman, Daredevil, Jonah Hex all fit the bill nicely.

The Weak Protagonist is the second-banana, the sidekick who often finds him or herself in need of rescue. Iceman of the original X-Men, The Invisible Woman of the Fantastic Four, and, of course, Robin the Boy Wonder could provide a few lines of suitable dialog.

Strong Crazy is the seriously disturbed bad-guy whose motivation is based on the fact that he’s just outright looney. Nobody will argue that The Joker personifies this beautifully. So does The Comedian from The Watchmen.

Weak Crazy is the person who’s just been shattered by trauma and just hasn’t recovered. Consider using dialog from stories where Spider-Man is feeling sorry for himself for not saving his beloved Uncle Ben or whining about how he’s going to pay Aunt May’s medical bills. Yes, Spider-Man is a pretty solid Rogue, too, but sometimes he can be awfully hard on himself and has been written with great “Weak Crazy” lines.

Strong Antagonist is sinister and rational. Cold, calculating, sometimes arrogant. Superman’s arch-foe Lex Luthor is one of the best examples of this, as is Doctor Doom from the Marvel Universe. Darth Vader, too.

The Crazy Antagonist is different than the Strong Crazy in that the character is desperate and not as calculating as, say The Joker, who has everything planned in advance. This is often a bad-guy in panic mode who will do anything to win and often isn’t very bright. Remember Sandman in Spider-Man 2? Or the miscellaneous bank-robbers that plague Gotham City. These characters provide great color for your demo.

Collecting lines of dialog from characters like this will make the producer of your game demo’s job a million times easier and will allow you to practice “game” dialog without taking directly from the games.

To find comic books in your area, visit your local library (most libraries have a comics/graphic novel section now) or visit www.comicshoplocator.com