When the Mic Goes Off

You’ve got to be good with a script to be a voice actor, but what may be less obvious is how good you have to be without one in a session. Now, if you stop listening right here I’ll be blunt and tell you: be professional. But if you want to stay for dessert, I’ll explain why it’s worth taking the time to think about how you perform when the mic isn’t recording you.

Working on the other side of the glass for a few years, I got to see all kinds of voice actors enter the booth. Beginners, up-and-comers, celebrities, and voice acting legends. I still remember the ones who showed up late and threw their headphones on the ground as soon as they were done. I saw some ask to try something crazy and blow away the director. I remember the guy playing Superman insisting on throwing away his own water bottles and tissues, and the way the man behind Scooby Doo would breeze into the studio, silently charming the whole production team before casually delivering utter brilliance. 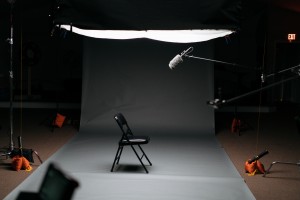 The reason I remember some and not others is because they made an impression beyond their talent. Beginners and people who are just breaking in have a tendency to be timid, mic shy, overly-obedient, nervous, and when the mic goes off, dead silent. They often aren’t aware they could be making an impression. On the other end there are those who think they have to be in fun voice actor mode 100% of the time or that they need a gimmick or a hat or a funny shirt to be remembered. I don’t remember a ton of the people with funny hats (we’d usually tell them to take them off so it doesn’t affect the sound going into the mic). But the people I kept seeing in the studio weren’t always ‘on’ or perfectly stiff.

The folks who get invited back have a sense of who they are. Once the engineer stops rolling, they’re aware of the moment. They know when to be all business, when they can slip in a joke or a funny story between takes, and the reason it works for them is because they’re not doing it because they want everyone to think they’re funny. They get a sense of the moment when they look up from the copy and see a room full of people behind soundproof glass at work.

Well, do you have a day job? What would it take for a random stranger to make you feel great in the middle of a work day? How big or little does an action need to be for it to make an impression? The answer isn’t a constant, but I can say that real moments happen between takes, walking in and out of the studio, gracefully and subtly placed in plain sight for anyone to enjoy. e

I guess the big secret is that when the mic goes off, that’s when the recording software in people’s minds snaps on. Be professional, be kind, don’t just have fun—share it.
Once you’re out the door there’s another actor, another session, and all you leave behind is how you made everyone in the room feel.