I’m Not Booking – Does that Mean I Suck?

So you are not booking many voice-over jobs, and possibly questioning your talents. Before you throw in the towel and decide you suck, consider the amount of time and training you’ve put in and if you need more. Most importantly ask yourself, am I being patient; after all, many successful voice-actors and actors have had to do many auditions and wait quite a while before they became successful at their craft.

Voice-over is an art. If this surprises you or seems to conflict with your desire to make a living as a voice-actor I assure you it doesn’t. If an artist has a hard time selling a painting at a showing, does that make him any less of an artist? Should they quit painting for good? Of course not! Yet you would be surprised at how many actors and voice-actors feel like quitting because they haven’t booked a job.

Many of my demo students have told me that they have wanted to be voice actors for years but life got in the way, or worse, they auditioned a few times in the past, didn’t book and decided to quit. But something inside kept nagging at them to try again.

In fact, achieving success as a voice actor wasn’t easy for me in the beginning. But there was something that kept me going, even when I started to question my abilities.

There are hundreds of stories of famous actors who were told they “didn’t have what it takes” and would never make it. Mark Ruffalo says he went on almost a thousand auditions before he ever booked a job. What was it that propelled him forward, when no one else believed in him? 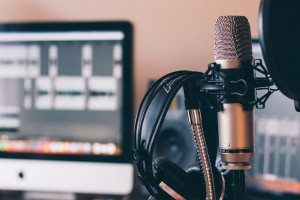 Everyone on earth has “that little voice” inside of us. The voice is our intuition, and we need to pay attention to it, because it tells us who we are.

Wikipedia defines intuition as “direct access to unconscious knowledge.” That’s heavy, because if your intuition is telling you to pursue acting and/or voice acting that means it’s your destiny – and nothing or nobody can get in your way – except you.

Just because something is our dream doesn’t always mean it’s easy to achieve. Voice acting, like all of the performing arts, requires lots of work to hone our artistry.

Our goal as voice-actors is to isolate and sharpen that quality that makes us uniquely who we are, then bring it to the imaginary circumstances put forth in the script. This is a very personal journey, filled with ups and downs, and it can take time to achieve this personal authenticity. As acting coach Anthony Meindel says,”It’s simple, but it’s not easy.”

When we audition and don’t book, it can feel as though we are being rejected for who we are as a person, and that doesn’t feel good. That’s why so many folks drop out of the game.

Ironically, the more auditions and rejections we get under our belt, the more we begin to realize what this whole pursuit of acting is about – it’s not about booking every role – it’s about booking the role! Finding the role that fits us, like Cinderella’s glass slipper. Once we discover and reveal who we are, the right roles will come to us. This happened for me and it can happen for you!

If you are getting into voice acting strictly to make money, you are putting the cart before the horse. Absolutely, you can make lots of money, but put your artistry first. Never stop taking acting classes and voice-over coaching. Join improv workshops to loosen up and take risks.

Become the greatest voice-actor that you can be, and remember: what others say – even those in power – is irrelevant. When you are professional at your craft, the money will follow.