We always enjoy hearing what our students have been up to since graduating from our program. This week, we were excited to catch up with Jacquelyn Liz, a 17 year old animation voice-over artist. She became “public” just less than two months out of Such A Voice’s training and since then, she has landed many voice-over gigs. Get to know more about Jacquelyn as a voice-over artist in the full interview below! 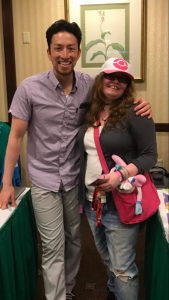 One of her idols, Todd Haberkorn from Fairytail

SAV: Thanks so much for taking this time! Tell us about what inspired you to get into voice-over.

Phipps: I was very much into watching anime cartoons, particularly Fairy Tail & Naruto. I asked my parents what they thought about my sound when I jokingly imitated one of the characters, Harlequinn. My mom’s reaction was priceless!  She said, with a quick turn of the head, “Say that again?”

She proceeded to ask me whether I could imitate other characters. When I did a couple, she got my dad to listen and they were both amazed. My mom said that after I went back into my room they had a serious talk about whether or not they were both thinking the same thing; was their daughter really as good as they thought she was? After that, I began searching the internet for voice acting and I stumbled upon the website, Behind The Voice Actors. I began auditioning for all kinds of roles. Most of this work was unpaid but it didn’t matter because I loved it. The next thing I did was join the Casting Call Club to gain more experience and build my professional portfolio. My mom wondered if there were any sites that had paid auditions. I ended up coming across Voices.com. Around six months later, someone approached her saying it might be a good idea to enroll me in classes with Such A Voice (SAV). My parents sat me down and discussed if I was really serious about this step. I was so excited that they enrolled me in the VIP program at SAV. I can’t put into words my year-long coaching experience with Michael Yurchak; it was priceless! He gave me what I needed to polish and improve my talent. After our last session, Michael joined me via Skype in the recording session at Sky Labs in Gainesville, Florida. This was the real deal! Recording my demo was such a wonderful experience.

You can check out my commercial demo and my animation demo on Vimeo!

My parents have a production company, so they threw together the visuals to go along with my audio reel. After walking out the door of Sky Labs that day, I remember my dad tearing apart my room, ordering me new furniture, and whisking me away to the nearest Guitar World to purchase the best equipment for a professional home studio. My mom spent countless hours on the phone with AVID technical/customer support, purchased a gaming computer from Alienware, while my dad designed and built a state of the art home studio. Within a week, my mom and dad had set up one awesome recording studio for me and that’s when my little voice-over business started.  We called it “Blessed With A Voice.”

The director of the show, “Fox Run,” wrote this card to Jacquelyn. She already has fans out in China!

During one of our last training sessions together, Michael said that I was unique because of my versatility and my ability to transition from one character’s voice to another without anyone guessing that the different characters were voiced by the same person. He went on to tell me that this was why my success would build quickly since the average voice artist cannot do that. I’ll never forget those words. He was right! Since then, I have had directors hire me for two characters within one project because they cannot believe how different I sound between the two. One project manager said that I was a diamond in the rough because of this ability! Because of this, Run Fox hired me immediately for two of their characters on a children’s audio book. My immediate success has been with Voice123, ACX, and Upwork (which has been a wonderful surprise). I have received a lot of unique opportunities. One of my favorite projects is the character for a new virtual reality video game coming out within the next year. One of my favorite parts of being a voice actor is voicing different characters and seeing my voice
come to life in a cartoon or video game.

While she considers Michael and Todd her idols, she also looks up to Cherami Leigh from Fairytail.

SAV: Did your coach help you overcome any specific obstacles?

Phipps: Michael is the best! I am embarrassed to say that I was stuck on voicing a 40-year-old British lady when I first started working with him. At the time, I had thought it was cool. He broke me of that sound immediately and encouraged me to embrace ME! He taught me how to start with my voice, perfect that first, and then work on the other voices.

SAV: What has been the most beneficial aspect of Such A Voice?

SAV: Have you done any voice over work yet? How did it go?

Phipps: Michael told me I was going to land jobs quickly.. Again, he was right! I love the instant gratification in this industry. I realize it’s not always going to be like this, but I’m incredibly blessed. I became “public” just less than two months out of SAV’s training and I have landed so many awesome projects that I personally love!

SAV: How do you prepare for your auditions? Any tips?

Phipps: Yes! Michael taught me to read the script to myself silently, figure out what the client wants to say to the listener, and then passionately and authentically deliver that message (all the while making myself sound approachable, too). 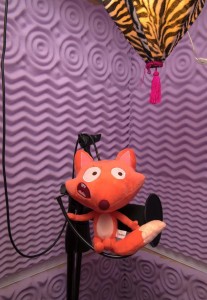 SAV: What sort of home studio do you use?

Phipps: Here are the specs for my home studio:

SAV: What would you consider your VO “niche” (audiobooks, documentaries, etc)?

SAV: What kind of jobs are you hoping to get in the future?

Phipps: This might sound hysterical to most, but my bucket list “all-time favorite project” would be a project from Funimation and would include working with Michael. I think he would be so much fun to work with. He cracked me up during the coaching sessions. He would coach me in voices of his characters. I never knew who was going to join us during our sessions. It was too much fun! 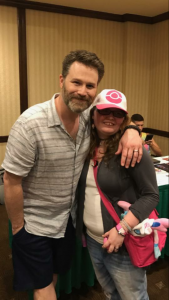 And let’s not forget.. Eric Vale from Dragon Ball Z!

Phipps: If I am to give anyone any advice, I would say that you must always remember that any audition could be the turning point of your career. Treat every audition as if it’s your golden ticket no matter how many auditions you do without a call back. Don’t put anything out there unless it’s 110%. I was the talent who, for two years, would just send the demo I created because I never wanted to do the extra work especially if there was a chance I wouldn’t hear back from them.. Lastly, yes, my parents set me up, but you must have that professional studio quality if you want to get anywhere in this industry. I have personally asked directors what they are looking for and it’s always a crisp, clear custom read that gets the part every time. I found a wonderful voice actor on Nuance that tells you step-by-step how to achieve that perfect sound. This was invaluable!

Jacquelyn describes this project as an incredible learning experience.  “This project taught me something I had been lacking spiritually. God has blessed me with a wonderful gift– my voice. I just think it was so wonderful to have received this as my very first project. That was pretty cool because I believe God sent me this as a sign that I will be great!”