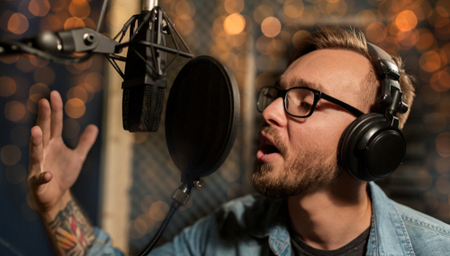 Have you ever wondered who was that iconic voice behind all those movie trailers in the 90s? Did you ever realize that Moe and Chief Wiggum from The Simpsons are actually voiced by the same person? How about that deep, convincing voice promoting Simply Orange juice? Don LaFontaine was the movie trailer voice we were so used to hearing before he passed away. Hank Azaria not only voices Moe and Chief Wiggum, but also several other Simpson characters. And that rich voice telling us to drink orange juice? Donald Sutherland. In the voice-over industry, your voice represents a character or relays information to the listeners. As a professional male voice actor, you may be a voice for radio or television, video games, commercials, promos, narrations, movie trailers, or cartoon characters. This is only just a small sampling of all the opportunities for male voice-over actors in the industry.

Where are male voice-overs needed?

The male voice-over industry has evolved from its roots in traditional male announcer to conversationalist. Your voice is your acting instrument, not just your way of announcing things. Male voice-over artists are needed for any gender-based ads for example, Gillette Razors or Hanes underwear. They are often sought after for commercials for performance vehicles like Mercedes, Land Rover, Jaguar, or Porsche. Financial services companies often look for professional male voice-over actors. Movie trailers are often voiced by men with rich, resonant, and distinct voices. Even though it’s been mentioned that male voice-over has moved from the announcer style voice to other realms, there’s still a need for male voices in sports announcements. Some other companies that may favor a male voice over a female voice would be John Deere, Budweiser, or Formula 1. This is just a small sampling of the myriad opportunities that await your unique male voice! If you’re auditioning on a platform like Voices.com, you can search by gender and age range to find specific jobs for men. The possibilities are really endless. If you dig in and do the training and marketing required to be a successful male voice actor, then you’ll be one step closer to obtaining the perfect job.

The evolution of male voice-over

As we’ve mentioned, the world of professional male voice-overs has greatly evolved. It used to be a male dominated industry, but not so much any more. Because of this, male voice-over artists have had to move away from the cliché, straight forward, by-the-book approach. Men have had to get out of their comfort zone and be more expressive. Moving past the ubiquitous announcer voice, they’ve had to learn how to add more versatility and range into their scripts. This is great news! You have the freedom to evolve and explore your complete pallet of potential that only you possess. Males in the voice-over world are only getting better and more creative at their craft! With Such A Voice’s voice-over training, you’ll figure out how to identify your niche and then perfect that.

How to get started as a male voice actor

If you have the desire to become the newest male voice-over talent on the block then you’ve come to the right place! First, you’ll need some professional voice-over training and we’re super excited to offer you that! Check out our shockingly simple secret to success in the voice-over world. Can you connect with a script and make it your story rather than just reading words off of a page? We’ll give you techniques to hone in on this necessary skill. The process of becoming a male voice talent requires practice, time, and research. The perfect starting point is with our shockingly simple secret to success so click here for that.

Marketing yourself as a male voice-over talent

You’ll need to learn how to market yourself and how to run your own voice-over business. Don’t feel intimidated though! We’re here to help you with this process. When you break into the voice-over world, you’ll find yourself becoming a solopreneur. You’ll have the ultimate freedom  to choose your own path in voice-over, to market yourself to companies that you care about, and to send your demos to clients whose interests match yours.

First, sign up to get in on our shockingly simple secret to success.

Then, if you’re as jazzed as we are about voice-over, you can enroll in our webinar, You’re on the Air: How to Really Make it in Voice-Overs, which is our version of an introductory voice-over course. In the webinar, our voice-over professionals will teach you about voice-over techniques, types of voice-overs, the union and how it works, how to market yourself, the perks of working in the comfort of your own home recording studio, and the importance of your professional voice-over demo for your future clients. At the end of the class, you will also get the chance to talk to your instructor one-on-one over the phone and do a live voice evaluation as well. This is a great way to see your potential as a male voice actor and decide what voice-over training classes you want to pursue next with Such A Voice.