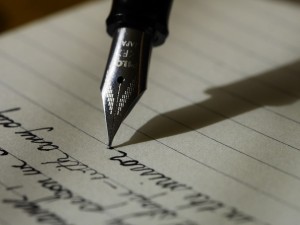 Here at Such A Voice, we offer different voice-over packages, some that include producing one or two demos. Our talented script writers, Brendan Carty and Bekka Burton, write scripts especially for you! They use a questionnaire called a script form to aid and inspire our students. The script form includes questions about your favorite products, eateries, public figures, and more. As a technique coach, I help students to use their form, beyond the script-writing process, and create a wheelhouse of go-to emotional connections.

It’s important to know the term method acting. It’s a way to express emotions authentically by connecting to real experiences in your own life. There may be a time in your voice-over training where you have a breakthrough or aha! moment. This happened for me during a voice-over workshop. From a cold read (seeing the script for the first time without practicing it), the copy appeared to emphasize the importance of taking care of your teeth, while really it was geared towards selling toothpaste. Can I get excited about toothpaste? No, not really, but when I saw the phrase, “taking care of your teeth,” I thought about an accident I’d had where my teeth were greatly compromised and I had to endure years of dental work as a result. Emotions don’t necessarily change or go away when you revisit an experience. When I read this copy cold, I had to mean it on the first try. Knowing all I had been through with numerous dentist visits, I was able to authentically deliver a gentle, yet inspiring, warning while remaining encouraging. It was one of the best reads I had done up to that point, because in thinking about my own personal experience, it sounded truly natural.

To illustrate how this works, listen for the emotion and tone of voice of someone you are talking to who is telling you a story from their past. Whether it happened recently or ten years ago, you’ll notice how this person feels about their story by their delivery. Sometimes the emotion is so strong (such as laughing so hard they can hardly get the details out), that it feels like something from the recent past. Yet, have you ever discovered sometimes the event actually happened many years ago? The answers in your script form may include likes and passions that developed since childhood up to the present. The more detailed you are in your answers in the script form, the more Bekka and Brendan, our aforementioned script writers, can really create a script specifically for you and your unique voice.

Once, I was going over one of my student’s script form. Under favorite products, he wrote: trash bags. Of course, I had to ask! Because I usually record sessions with my students and send them the mp3 recording after our session, my student was able to listen back to his tone of voice. He heard not only how he sounded in a naturally enthusiastic state, but he also learned a few things. One being that trash bags that are strong and don’t fall apart are very important to him. I suggested that when he has copy for a product that boasts of being “well made” that he should think of his beloved trash bags!

When you can dissect the what and why of every question answered on your script form, you can think of these favorite things and replace them (in your mind) with the product you just can’t seem to authentically connect with. Ask your friends or your SAV technique coach to go over your script form with you. Have them ask you questions much like how an interviewer would, probing for the meaning behind your answers. Be sure your conversation is being recorded, then listen back to it. You will discover that you have just created a nice tool box of go-to opinions, attitudes, and emotional responses! This is not to replace script analysis, but rather it is meant as an aid, especially for in-studio auditions that require a cold read. I love our script form because it is an essential tool, not only for the script writer, but for you, the VO artist!

Check out our VO Pro Membership and the Such A Voice blog for more content like this!

Rosemary Chase is a NY-based SAG-AFTRA union actor and voice-over artist. She has been featured on numerous television and feature film projects, including such hit shows as “Elementary”, “Unbreakable Kimmy Schmidt”, and has appeared in several episodes of “Saturday Night Live”. She has voiced projects for GE Capital, Fidelity, a variety of dubbing projects, and a short film (playing an on-air radio personality). She landed her first feature animation film playing a loveable cow, Theodora, in “Pup 2 No Good”. Rosemary’s long list of diverse acting training from local studios around her NYC neighborhood include stand-up comedy at The Comedy Cellar, improv at Upright Citizen’s Brigade, and Meisner Training, at MN Studio. To learn more about Rosemary’s journey as a voice-over artist, visit www.rosemarychase.com.