How to Achieve a Hall of Fame Career

Summer is here and baseball season is in full swing. If you’re dreaming of a Hall of Fame career in the voice-over business, you may want to take a look at our National Pastime for some tips and advice on how to make that happen.

1) The Importance of “Putting the Ball in Play” 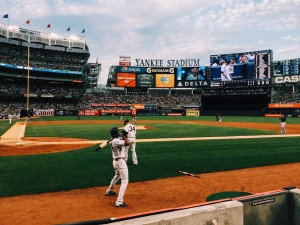 What do the New York Yankees and SAV students have in common? Success.

It’s not enough to have a great sounding demo and a fantastic looking website. In order to build a successful voice-over business, you have to step up to the plate and take your hacks at the ball. Meaning, you have to reach out to potential clients and show them what you offer, rather than expecting them to come to you. Just put the ball in play, you never know what can happen after that. Which leads to my next point…

You may get the occasional free pass to first base via a walk or being hit by a pitch, but don’t expect to become an All-Star that way. In the VO business, don’t expect to make a living through customers finding you through your website alone. You need to continuously market yourself in hopes of reaching new clients. Email campaigns, postcard mailings, and cold calling are a good place to start. Once you land a new client, do everything you can to show them why they should use you again and again. And then prepare for your next at-bat.

3) Look For Your Pitch to Hit

Don’t go to the plate thinking you’re going to swing at every pitch. You’ll likely end up striking out on a pitch in the dirt. The same applies for voice-overs. For example, if you belong to a pay-to-play site, don’t try to audition for every single job that gets posted. You’ll end up never leaving your studio and burning yourself out. Don’t swing at everything. If you have a “guy or girl next door” type voice style, you probably wouldn’t be a great fit for a blockbuster action movie trailer. Instead, focus on the ones that are in your wheelhouse and knock them out of the park!

4) Make Sure to Touch Base

You could hit the ball out of the park, but if you forget to touch any of the bases on your way home, you’ll be called out. The same can be said about your voice-over business. You could hit it out of the park by getting a response from a potential new client or business you’re targeting with an email saying “Great demo, I’ll add you to our voice bank”, or “Awesome voice, I’m always looking to add new talent.” But if you don’t touch base with them in the upcoming months, you could easily get lost in the shuffle and get called out. It’s always good to check in every few months to make sure they haven’t forgotten about you and to keep your name fresh in their minds.

Ted Williams, who many consider the greatest hitter of all-time had a career batting average of .344. Which means he only hit the ball and got on base safely 34% of the time he was up to bat. Hall of Famer Mickey Mantle, one of the most famous ballplayers of all time had a .298 career average or a 29% success rate at the plate. Meaning, even baseball’s greats fail 70% of the time at-bat. Failure is going to be a part of your voice-over business too. You will be passed over on many auditions, the majority of your emails will not be responded to and most of your marketing mailers will get thrown out. That doesn’t mean you can’t become a Hall of Famer, though. Persistence is the name of the game in the voice-over business. Keep honing your craft, keep working on your marketing, keep knocking on doors even if most of them are shut in your face. Whatever you do, just keep going! It may take a while to get where you want to get, which is most likely a full-time career in voice-overs, but it is possible, you just can’t be afraid to swing the bat.