Stella Adler, a famous acting teacher, once recounted teaching method acting to a young Marlon Brando. In the exercise, the class was preparing to embody chickens. The teacher would yell out a different scenario, “You’re in a storm!” and the class would react accordingly. But when the teacher mentioned, “A nuclear bomb is about to drop!” every student panicked -except for Brando, who quietly sat on a nest and laid an egg calmly. Why?

“Because,” and to butcher the quote and a Brando impression all at once “a chicken doesn’t know anything about nuclear bombs.” 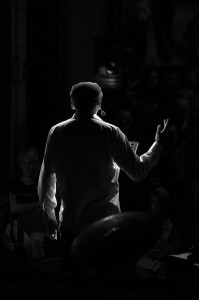 It’s my hope that preceding anecdote and this article will highlight the simple application of a complicated topic: Stanislavaski’s System or Method of acting. Over the years “method acting” has been extrapolated, interpreted, and given a rather “dramatic-wrap” but at it’s core it’s about responding truthfully.

Wait a second— what could Konstantin Stanislavsky have to say regarding voice-over? Konstantin Stanivalsky, was a Russian actor who rose to prominence in the late 1800s, but his theories and practices on acting paved the way for modern acting as we know it today.

Before Konstatin Stanislavski, acting was considered “theatrical” or “presentational” -larger than life. Through his work and his teaching at the Moscow Art Theatre, he developed a system or what later became known as “method acting” to bringing realistic or truthful acting choices to any and every role.

Now, before you go out and purchase a lab coat for your medical narration or buy a luxury vehicle to help you make your Lexus commercials more believable,let’s talk a little about method acting.

The system has a series of questions that can very easily be applied to your VO reads and auditions:

1. Who Am I? — Be it an announcer for a Tide commercial or an orc warlord in a fantasy video game, there is always a “role”, and often answering this question can give some weight behind the words and add to the perspective of the speaker.

2. Where Am I? – When approaching commercial copy, initially it can be very difficult to ask this question. Often I think of myself having a conversation at a coffee table, sitting 3-4 feet from the person I am speaking to. Depending on the spot or scene, I also consider background noise and environmental changes (such as a loud espresso machine).

3. When Is It? —If it isn’t indicated, try this a few different ways. What happens when this breakfast scene takes place early in the morning, the sun isn’t even up or maybe it’s a breakfast for dinner scenario late at night?

Using numbers 4-7 to influence your read it should help you find natural breaks, pacing changes and pitch or volume adjustments in a given situation. The change of attitude or tactics in a voice-over scene are often what dictate rhythm, tone, and pauses.

When in doubt…Memory and the Magic IF

Using personal experience is always the preference, and I try to think of situations in my life that I can use to bounce off in a real-life scenario. If I’m reading a monologue about the love of my life leaving me, I can start by remembering how I felt when I was last broken up with. *pause for awwww*

Now IF I don’t have a memory or prior experience, I can use my imagination and keen sense of pretend to aid me by asking— the magic “IF”:What IF this happened to me? What IF someone approached ME in a grocery store singing the praises of Blue Diamond Almond Milk? How would I respond if someone had an “announcery” sound when speaking unsolicited?

What IF I wanted to tell someone about Blue Diamond Almond Milk, because I tried it and enjoyed it and wanted to pass that personal connection on?

Here’s hoping some of the basics of the Stanislavsky System will aid your VO auditions and bookings, and that like “Brando” you’ll be chicken enough to try them out!