About two weeks ago, I was walking through the aisles of a CVS in Nashville and I saw a kid playing with a new deluxe talking action figure, giggling happily as he pressed the button and the action figure recited it’s ten catch-phrases. It put a smile on my face to see that the voice was bringing such happiness to him, and as it so happens, it was MY voice. Voicing characters in cartoons and videogames is the thrill of a lifetime, but being able to lend a voice to a toy is one of the most rewarding things to do in VO, in my opinion. Your voice and performance play a small, yet crucial part in sparking imagination and play for kids!

In fact, some of my happiest childhood memories involved going over to my best friend Justin’s house with a box of action figures. At the time, technology wasn’t quite where it is now and not everything was electronic, so we would provide the voices and sound effects ourselves. Come to think of it, those hours spent in his living room setting up and knocking down X-men action figures might have been some of my first acting experiences.

Now more than ever, consumer products drive every corner of the VO industry, but it also shines a light on one of the most delightful by-products of this type of VO work: happiness. Sure, many of these toys can have small speakers, but that doesn’t mean they make any less of a big impact, especially to a child! And sometimes work on toys can even lead to the full animated treatment -so many characters began life in a collectible box before making it to the big-time on television: Barbie, He-Man or Stretch Armstrong, just to name a few.

If you’ve never considered lending a voice to toys before, here’s just a few places VO actors might find opportunity to voice toys: 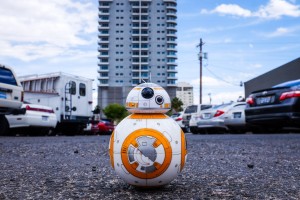 Somebody has to voice this BB-8 toy; why not you?

Action Figures, Talking Dolls, Tie-In-Toys: Yes, with giant blockbuster movies come giant play-sets, stuffed plushies, and even fast-food toys. It’s not uncommon for these toys to be voiced using lifted lines from the film, with limited pre-negotiated usage, but occasionally the original actors will pass on the project and these toys require skillful soundalikes to lend a lip.

Talking Cards, Decor and Ornaments: At the time of publishing, it’s September which means that in just a matter of weeks, Halloween and Christmas decorations will begin surfacing for the usual holiday overhaul in shopping centers and toy shelves. And with it comes a lot of opportunities. Don’t believe me? Take a walk through your grocery store and give a listen to the many novelty products that line the aisles (hey, I once even auditioned to voice a Pumpkin shaped like a Toilet—you can’t make this up). This particular realm of toy voices can be rewarding, as a talking ornament or holiday keepsake becomes a sentimental memory or even the cornerstone of a new holiday tradition! You better watch out, Elf on the Shelf!

Educational Toys & Apps: Ah yes, we’ve come along way since “The cow says: MOO!” some of the most cutting edge technology is used in kids toys these days, and there have been some incredible technological leaps that integrate toys and apps, requiring an incredibly large amount of pre-recorded voice-over.

Now that we’ve discussed some of the fun and games of toy work— let’s discuss acquiring work for toys. Since the client might be directly producing the voices for their toy or consumer product, it is often best to attempt to reach out to these toy companies and manufacturers directly. In fact, most of the toy-work I’ve done has been directly offered from the company. Although I have received toy auditions through agents, they most often appear from toy and card companies that are located regionally throughout the country.

One final word of advice: When pursuing work in toys, the one thing to consider is that often the rates are negotiated at a non-union buy-out. Even under a union contract, sometimes it can be quite difficult to calculate a fair rate of compensation especially if you happen to be working on the next “Tickle-Me-Elmo”. Here’s wishing you lots of luck on your pursuit of toy voices, but don’t let them pull your  string until you’ve negotiated fair compensation for your VO services.