SAV in the News – Brian Thon Takes on the World

Here at Such A Voice, we’re proud to have some of the brightest stars in the voice-over universe working on our staff as coaches and producers. One of those people is Brian Thon. Nicknamed “The Voice” for his unforgettable, resonant delivery, Brian is a former Such A Voice student who has built a thriving career as a voice actor, becoming one of the go-to talents for some of the world’s biggest brands. But he’s also a Such A Voice producer, helping current students master their demos just like he did all those years ago.

Recently, Brian was interviewed for Seven Days, a news and arts magazine in Vermont, where Brian resides. In it, he discusses how he got into voice-over work, the wacky projects he’s done, and the secrets of wine corks. We’ve reprinted the article below, but you can check out the original here. 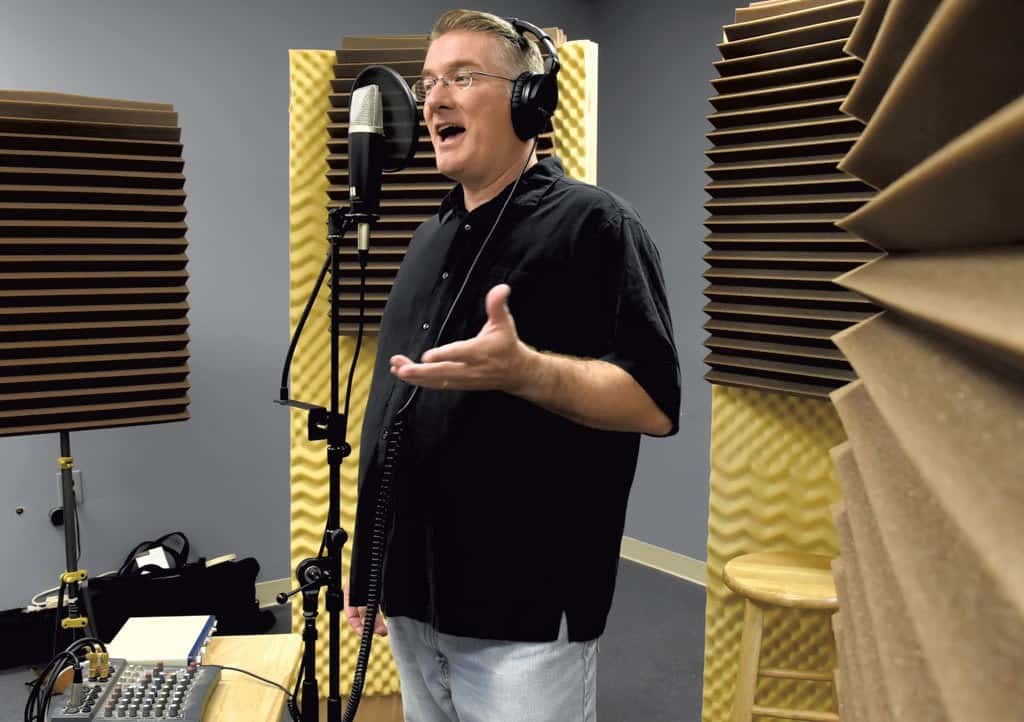 We live in a world where machines tell us what to do, from when to board an airplane to how to administer an EpiPen. As one of the voices of that world, voice-over professional Brian Thon (pronounced “tone”) aims to bring humanity to his art. “I take the material deeply to heart,” says the Richmond resident. “I study it carefully so that, when I open my mouth, it sounds like it’s coming from me, whatever the ‘it’ is.”

Amazon, GE Healthcare, Fox News and the Stowe Country Club are among the international and local clients who’ve called on Thon to provide “it.” Those gigs sound pretty good to a guy who was a longtime account executive for DHL before he heeded the call to a new career in 2008. The father of three teenagers, president and CEO of digital media production company True Tone Studios, and a coach at South Burlington studio Such a Voice, Thon has croaked like a frog, complained like a curmudgeon and coached clients for jobs with Disney, the Discovery Channel and Apple — not to mention feature films and Broadway. Recently, Seven Days rang him up for a talking-to.

SEVEN DAYS: How did you become interested in voice-overs? Were you super into movies as a kid or something? You know, “In a world…”?

BRIAN THON: Ha ha ha! I can’t actually even do that voice: “In a world…” But I’m totally a movie guy. I love movies. I don’t know if this is a boy thing, but you make sounds with your mouth when you’re a kid — you’re doing sound effects; you’re watching Looney Tunes and making laser sounds and the cracking of a bat on the baseball field and all that. My dad was a broadcasting engineer, so I was around technology and media, although it looked very different in those days.

People would say, “You should be on the radio; you’ve got a radio-guy voice.” But there’s a lot more versatility in voice work. I like the nuance in the performance as a voice talent. It’s not about you — it’s always about the message and the emotional engagement of the audience, reaching people where they are and figuring out how to do that best. You have to be authentic. It can’t sound like words on a page; it has to come from your heart in a believable way.

SD: What was your first voice-over project?

BT: GE Healthcare — they were opening a subsidiary company, Omnyx, and I did the company name and the tagline. That was my first professional voice-over. It was “Something … the Scope of Pathology.”

SD: Were you nervous? How many takes did you do?

BT: It was funny, because there was no preestablished brand, no YouTube to go to, so it was a stab in the dark. So I busted off a bunch of takes; I gave them three versions to choose from — which is a little unusual, but it was so short, that was OK to do — and it turned out to be this sort of amalgamation [of takes].

SD: How do you prep yourself? You have a distinctive voice, but do you drink tea, or swish with mouthwash, or what?

BT: [Coughs and laughs.] I don’t drink tea. Hot and cold drinks actually constrict your vocal cords, so room temperature is good; a little bit of citrus is good to activate the glands at the back of your throat — that helps keep you moist. One activity I do religiously before I voice a script is, I put a cork between my front teeth, and then read the entire script out loud. It sounds ridiculous and stupid, but nobody’s around. But it forces my jaw muscles to loosen up, so when I take the cork out, I can be very crisp and very clean on the delivery. It works wonderfully!

SD: What’s the wackiest voice-over you’ve had to do?

BT: Many years ago, I did overdubbing for a bunch of short films in an accent that … OK, so there were aliens. It was pseudo-English, but not clearly English, because it had to be an outside-the-solar-system voice.

SD: What’s the most annoying sound to you?

BT: The sound of people who speak with their mouths perpetually open, ending all sentences on an upswing in pitch, like every statement is a question. Just … no.

SD: OK, how can you tell if someone has talent? Let’s say just from talking to me, do I have potential?

BT: Just chatting with you, yes, you have a relatable sound, you’re clearly intelligent and well read, you articulate well, and there’s a subtle texture and timbre to your voice.

SD: Too many corks!

BT: Yeah, so you have a relatable voice. But here’s the rub. If I put a script in front of you, and you need to give that life in the way the story on the page intends, that’s the real test.

SD: So how do you train other people to improve their voices?

BT: If they have a regional dialect voice … there’s training to go from “Pahk the cah in the yahd” to “Park the car in the yard.” And some need to sound less put-on and more natural. If a person has a speech impediment, voice therapy can help. But, while voice-over is statistically one of the most lucrative vocations on the planet, it isn’t for everyone.

SD: Do you do ring tones?

BT: There are so many different kinds of voice-overs, it’s mind-blowing. Think of the BTV airport, or Shaw’s — the self-checkout talks to you. Gas pumps, your children’s toys; there’s an EpiPen that has a voice-over chip in it.

SD: How do you get all the voices out of your head?

BT: The editing process is helpful; I’m now listening with a more critical ear with software.

SD: OK, one more question: Do you listen to music, being so attuned to sound?

BT: This is an awesome question! No one ever asks this. I friggin’ love music! Alternative rock, progressive rock, primarily. The classics, Beatles, Queen. But some of my more obscure favorites are Porcupine Tree, People in Planes.