Jared McKiernan recorded his demos back in 2017, and since then has been rocking out on the radio. Read about his journey from someone who was new to VO to becoming the “voice of the station”!

Before getting into voice-over, I was living in Long Beach, California, working as the managing editor for The Salvation Army’s publishing department, where we produced videos and wrote news to highlight programs and garner donor support. It was a great job but I’d been looking for different ways I could scratch my creative itch as a storyteller, and voice-overs were something I’d been mulling over since college, so I did some research and signed up for SAV training shortly thereafter.

When you had started with SAV, what was your end goal in doing the training?

My end goal was definitely to be working in radio. There are no shortage of avenues through which to build a voice-over career, but I felt like working in radio provided a great level of exposure, consistent work, a fantastic creative outlet, and a platform to pivot to any other type of voice-over relatively easily given the right connections.

What was the most valuable part of your training with SAV?

Definitely the one-on-one coaching with Bonnie Gilgallon. She’s a seasoned pro in the industry and like me, she came from the journalism world, so I think we connected well and whenever she gave me any kind of feedback, I knew exactly what she meant and how to incorporate her notes into my work. So I certainly improved leaps and bounds under the three months or so of her tutelage, and that really fired me up to take that next leap.

How have things progressed since getting into VO?

After recording several spots for a few radio stations in Northern Michigan, I got a message from Sean “Finster” Finnegan, a popular long-time radio morning host in the area, who was working on launching a brand new station in Traverse City, Michigan called North FM. He liked my sound and wanted me to be the official “voice of the station,” to record all of the promo content for 94.5 and 106.3 going forward. Of course I said yes! So from that point on, I’ve been coming into the North FM station several times a week and recording whatever scripts they hand me, ranging from breast cancer awareness PSAs to Michigan Lottery promos to general station tags. It’s a blast!

North FM keeps me pretty busy, but I’ve been looking for other ways I can provide VO services too. One of the new skills I’m learning is animated video production. Animated explainer videos are a great tool for businesses to communicate their services to their customers. So I’m planning to package that with scriptwriting and voiceover services for any interested parties.

Are your recordings with North FM in-studio, or do you record at home?

I record on-site. I’d like to set up a home studio in the next year or so, but for now, I’m more than happy to drop into North FM and record. I feel a little more pressure (in a good way) recording at the station, and it’s always nice to have the client in the room with you so you can get that immediate feedback and know you’re giving them exactly what they want in real-time. 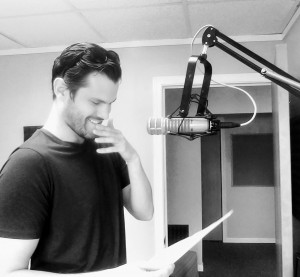 What would your dream VO role/project be?

Outside of the one I have with North FM, I’d love to voice an animated character in a full-length feature film. I would have way too much fun with that.

Is there anyone in particular (at SAV or otherwise) that has been a mentor/role model in the industry?

Finster, the morning host at North FM, has been a fantastic individual to learn from. He’s got tons of experience in multiple markets in the industry and he has a great pulse on his audience and what makes great radio. Plus he’s fun to work with. And that’s why I think most people get into voice-over in the first place: to let loose and enjoy themselves.

What advice would you have for folks currently going through their VO training?

Work on it a little bit every day even if you don’t feel the improvement with each individual practice, because over time all of those 10 or 15-minute sessions will total up to a masterpiece. I’m still a ways off from that myself, but I know I’m on the right track. Also, remember that voice-overs are really voice acting. But unlike stage or film acting, you don’t have your face and your body to convey emotion. So you have to summon all of that expression and deliver it solely with your pipes. So go big. Channel your inner theater geek. You can always dial it back if need be.

Aside from VO, what are your hobbies or passions in life?

I love my wife and my two step kids -they’re my favorite part of every day. I love storytelling, reading, writing, traveling, investing, hooping in the driveway, and just spending time with my people.

Any other thoughts you have about voice-over in general?

One of the things you frequently hear about the voice-over industry is that it’s “oversaturated.” It’s true. But so is everything else. The important thing to remember is that there’s always room for greatness in voice-overs or anything else. So don’t worry so much about how you stack up to every other voice-over artist. Get out of your own way. Just focus on improving every day, and believe that you’ll reach your goals. And you will.

North-FM.com. Listen to the live stream. I come on like every 5 minutes. 🙂