Jacquelyn completed her training with Such A Voice in 2017, and very quickly found success in the animation space. We actually interviewed her shortly after she finished up with us, and now its time for an update! Read the original interview here.

So we originally did a spotlight interview in 2017 when you were fresh out of training with SAV; what’s changed between then and now?

The biggest thing is the training at Such A Voice which was of course on point with the great Michael Yurchak!  But even with great training, you might as well not audition unless your recording is spot on, so recording quality is key. I was not accepted into VoiceBunny until I made some changes to my recording studio space. Since then, I have been pulling in $2000/month and landing more and more jobs. It is a really big deal having a PERFECT recording.

Tell us about some of the changes and upgrades you’ve made to your studio space!

I started out like everyone, trying to spend as little out of pocket as possible: a Focusrite Interface, Audacity for editing, and a pretty basic sound-dampening setup studio with foam glued to two exterior doors engineered to the corner of my bedroom, and a Bluebird condenser mic. Then I moved on to a Shure SM7B with a Cloudlifter. It was better, but I was still not satisfied with the quality at that point in my career, so we bought a Whisper Room (if you are considering one, tell them Jacquelyn Liz sent you!).

Now I’ve got the Whisper Room, a Sennheiser shotgun condenser mic with a reflection filter, Pro Tools for editing, and a UA Apollo Twin interface. 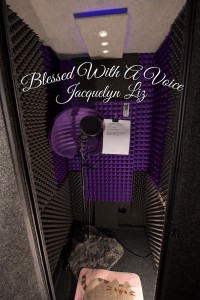 Having some time to reflect since you originally were with us, what stuck out to you in SAV’s program that really helped you launch into your career?

What helped me was the training from Michael Yurchak, that is the biggest reason why I signed on with SAV. He has a Masters in teaching, he is literally PERFECT!

What about Michael’s approach did you think was so special?

Michael has such a Je Ne Sais Quoi, it’s his entire aura. He is really great and it’s actually hard to put it into words. But I can say this: it is definitely without a doubt a God-given talent!

He is a master of voice-over and he brings to the table a perfect message during every session when coaching anyone.

One thing he always said was, “Know the meaning of the script…really FEEL your words and the reason you are doing this, and sound approachable/relatable.”

Passion is everything and it will set you apart from the rest auditioning. This was also great advice from Michael.

I know a lot of your current work is under NDA, but are there any upcoming projects you CAN tell us about? What’s on the horizon for 2020?

My show is coming out, produced by Theme Parkology called “Voicing Your Talent” in Los Angeles, California. In it, I will be interviewing famous voice actors, mostly for Disney movies, but some Anime talent as well.

What are your best tips for keeping your vocal cords healthy and happy? Any secret recipes you’ve got?

A Starbucks Medicine Ball before any script read has helped me a lot!

I would describe my sound as SHOCKINGLY VERSATILE. I can go from a 3-year-old toddler to general American, to British with a Cockney twist unique to me, to a typical teenage bully with a New York accent (think Harley Quinn), to a senior citizen that’s been smoking for 40 years. Plus a ton of voices in between!

I know you are a big anime and cartoon fan: is there one character, in particular, you’re dreaming of voicing someday?

Any advice for folks who are currently in the process of launching their careers?

Whisper Room is an amazing recording space; tell them Jacquelyn Liz sent you!