Here at Such A Voice, we bring together some pretty incredible professionals from all different parts of the world to provide our students with a top voice-over education. Our staff members have such a wide variety of backgrounds and unique personalities. From working VO actors starring in movies, video games, and national TV commercial campaigns, to producers spending their days working on voice-over demos as well as broadcast voice-over work, to copywriters, casting directors and many other industry skills in between! We genuinely love bringing our expertise and our experiences together to create the best programs for our students.

For this week’s staff spotlight, we’d like to introduce you to one of our coaches, Michael Yurchak. 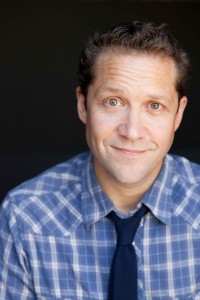 SAV: Hi Michael! We’re happy to have some time to catch up with you. How’s your start to 2018? Do you have any big plans for this year in the VO industry?

Yurchak: Happy New Year! I’m happy to report that January has been busy so far. I’m doing four anime shows at the moment, so that has been really fun. I play bad guys on all four shows, which I love. Going into the studio each week is always a blast! I was also lucky enough to finish 2017 with a little flurry of work (a movie trailer, some promo stuff for Nickelodeon, a Taco Bell TV spot, and a narration gig for a reality pilot). Having the opportunity to work within a bunch of the different platforms in the VO industry is great because they all require such different types of performance and keep you on your toes. On-camera, I’ll be in the movie Super Troopers 2. It comes out on April 20th, 2018. I’m excited to see how that turns out, too!

SAV: As a Such A Voice coach, do you have a go-to piece of advice that you always provide to your students?

Yurchak: I talk a lot about what I call the “Three Cs:” clarity, commitment, and consistency. The choices we make as VO artists need to be driven by the clarity of character and the practical role they play within the story you’re trying to tell. Once you decide on something, you have to commit wholeheartedly. Even the right choice, if only done halfway, is not going to book the gig. A teacher of mine once said that we should always have the courage to succeed OR fail gloriously! Finally, the ability to stay consistent with those choices (in terms of vocal quality and point of view) from beginning to end is critical. Essentially, I think it’s important to develop a sense of confidence that allows the artist to trust themselves and deliver a full performance every time. It may not always be the one the director or producer had in mind, but a fully committed, clear, and consistent read will always reflect well on you as a professional. 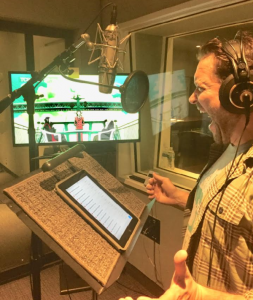 SAV: What’s the most challenging aspect of the VO industry?

Yurchak: The trust we all need in ourselves is the most difficult thing to hold onto. It’s easy to feel confident when you’re booking a lot, but what about the times between? We all have them. Working on the craft every single day is what keeps me sharp. It’s like practicing an instrument, you don’t just do it the night before a gig or the day of an audition. It needs constant attention.

SAV: How did you first get started in the VO industry?

Yurchak: I was doing a lot of on-camera commercial work and sketch comedy stuff where I played with different voices and character roles. I had a vague idea that I’d like to try VO, but it was a pretty tight market at the time (the internet barely existed and home studios were rare). I took a class with a VO casting director (Carroll Kimble) who helped me put together a rough demo, literally on a cassette tape. She got me a meeting at an agency who signed me.
I got lucky pretty quickly. It felt like a natural fit, so I just stayed with it. That was almost 20 years ago!

SAV: What have been some of your favorite VO projects that you’ve worked on?

Yurchak: My very first VO gig was as the voice of a national toy store called KB Kids. That job really taught me a lot about the industry and what it means to be a professional. I was so green! We recorded new radio and television spots every week for about six months, and by the time the job ended, it was like I’d gone to VO grad school! I also love doing animation and video games. I’ve been lucky enough to have had some recurring characters that have given me a chance to relax and really play with the storylines, which is harder to do with one-off guest spots or a single day on a show. Playing Hugo in Skylanders and Jet the Hawk for Sonic was neat because my kids were just the right ages to be into those games when I was in those character roles. Now, doing Tobi and Obito on Naruto Shippuden is pretty awesome. A lot of my kid’s friends love the show, so my boys can pretend they have a cool dad!

Below are the characters that Yurchak has voiced. 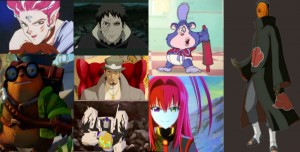 SAV: What do you do on your days off? Any hobbies that you have?

Yurchak: I play guitar and do some theater when there’s time. Mostly, I’m a dad.  For the last few years, I’ve been finishing up my doctorate in Educational Theater. I actually just successfully defended my dissertation in December, so it’s Dr. Yurchak now!

SAV: Would you rather watch a movie or a television show?

Yurchak: That’s tough. TV has gotten so good! I’m a huge Game of Thrones fan and I love getting hooked into a series. But there’s nothing like getting lost in a great movie!

Yurchak: My kids just learned to snowboard, so I know that’ll be on a lot! I also love watching the moguls during freestyle skiing. I used to do radio play-by-play for my college hockey team, so I’ll watch hockey too.

SAV: Say it’s snowing out.. are you one to go out in the snow and partake in some outdoor adventure or do you prefer bundling up in the house and watching a good movie or reading a book?

Yurchak: I’m definitely gonna partake in the adventure! I like reading and movies, but I love winter sports!

SAV: What’s a music lyric that always seems to get stuck in your head somehow?

Yurchak: I’m an old Dead Head. I sing a song to my boys most nights at bedtime called Standing on the Moon. There’s a lyric in that one that I love: “A lovely view of heaven, but I’d rather be with you.” That rattles around in my head when things get hectic, which is kind of a lot.