Better than Robots: Why IVR Needs a Human Touch

Why? Because, more often than not, it’s a robo-voice telling me that there’s some pressing matter I need to take care of right now and did I know I was eligible for health insurance? Yes, thank you robot, I actually have health insurance. I’m good.

“This is an important reminder about…” – No. It’s not. Ignore.

You’re with me, right? We all get those robo-calls. Constantly. It seems like at least a five-time daily occurrence in my life at the moment. So, we stop answering the phone. We screen like crazy unless we’re expecting a call or recognize the number. We use our phones as anything other than…well, an actual phone.

And when you do have to call customer service or can’t communicate something via email and you’re forced on the line, there’s nothing worse than the phone being answered by a robot, or, nearly just as awful, a bad pre-recorded message.

Yet, it’s where business is headed. Auto 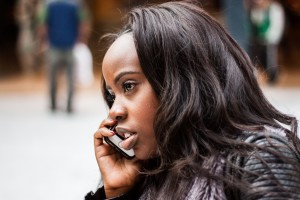 mate to economize. Save money and time. And of course, companies are looking for the best ways to be efficient. But, having a client’s first impression of your company be a negative one, especially when they’re probably already frustrated with something or else they wouldn’t be calling in the first place – is definitely something to avoid. This can be much more costly in the long run.

Luckily, there’s a middle ground. A solution where everyone wins. And it’s an often-overlooked, seemingly-strange corner of the voice-over world – IVR. Interactive Voice Response.

Ever taken an automated survey and had your answers recorded for “quality control purposes”? Or walked through a voice mail system in order to get to the right person on the other end? Or even had an automated pre-interview via the phone? We’ve all had some experience with IVR in real life and, professionally as a voice-over artist, it’s quite a fun niche.

Some companies might be tempted to rely on a robotic voice for this particular need, but research shows that would be a mistake. A recent Voices.com report found that “voice technology preference leans towards a human voice. Even with strides in technology, it seems that by-and-large, synthetic voices are not regarded as a suitable alternative for a natural human sound. 91% of survey respondents agreed or strongly agreed that a human voice is more powerful than a synthetic, or computer-generated voice.” This is great news for voice-over actors, and something businesses should take note of. Hiring a voice-over actor instead of relying on a computer-generated voice for phone systems helps customers connect to a brand through a human voice.

People like to talk to people. Even if it’s just a recording.

A good IVR voice-over actor will bring humanity into even the driest and most utilitarian of scripts. They’ll be the friendly receptionist that’s too expensive to have on duty 24/7. They’ll field your calls, answer FAQs, record your surveys and reassure customers that their issues will be handled. In this instance, there’s an easy way to have the best of both worlds – automated AND human.

Still another applicable trend in the voice-over world is the increase in requests for regional dialects and accents. Gone (or at least on their way out) are the days of “neutral” English, “general” American and “trans-Atlantic” accents. A strong connection point for companies to their consumers is a regional, real sounding person on their commercials, voicemails and help lines. And that, friends, is something only a human can do.

Put another way in this article from YumYum Videos, “only a professional voice talent can make you feel happiness, compassion or excitement” . And when you’re impatiently waiting on hold, or kindly answering an automated survey, or trying to get an issue fixed with customer support, or desperately attempting to get ahold of a human to air your grievances – it’s extremely helpful to have a human touch guiding you through the automated system.

Voice-over actors are able to make emotional connections to text, that robots simply cannot imitate, which allows a connection to your audience that can be gained in no other way.