Your A2 and You

You’re behind the mic and you look up—who’s on the other side of the glass?

The person touching all the faders and buttons is your engineer, and the person pressing a button telling you to put a little more vulnerability into the read is your director. Maybe behind them are some people in suits with paperwork for you to sign on your way out. Clients. But who’s the one next to the engineer not saying anything besides “take four,” and what are they doing?

That’s your A2 or assistant engineer, who probably set up your mic and headphones, and is paying close attention to the sounds coming out of your mouth as they appear on the screen in front of them. Understanding the role of the A2 will erase a lot of ambiguity and uncertainty of a session because you will be thinking in terms of the production pipeline as opposed to just thinking about how good you sound. That’s a good look.

The A2 also has a copy of your script and appears to be writing or drawing on it? Yes: he’s taking script notes, cutting takes, slating, and listening for sound quality.

Not every session has an A2 present and not every session will slate takes. If you notice someone says “take 1” at the beginning of your session, then be sure to wait for the slate on each take before you start performing. That tells you that the machines are all working, the software is running, the engineer is ready with a level, and most importantly, that you are actually being recorded when you start talking. 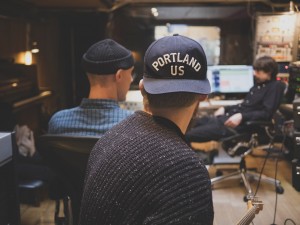 What’s in the notes? Once your session is over, the audio of the entire session goes to an editor who has to find the best takes. If your session was four hours long, then there’s close to four hours of sound waves to scroll through. The notes tell the dialogue editor which takes:

Let’s say on take 8 of your session you do one line as an “ABC,” meaning you’re giving three alternate reads, (an ‘A,’ a ‘B,’ and a ‘C’ take) and the director liked your C take. This will be notated as “8ABC,” and C will get circled. This tells the editor to go to the eighth take and isolate the third cluster of waveforms on that take. Or if you have a false start (and everybody does) that gets notated as an ‘X’ or as “fsX” for ‘false start.’ And if there are three false starts there would be three X’s (fsXXX). Because the editor knows how many false starts to look for, they can skip past them when he’s looking for that golden take.

If you find twenty-six ways to say ‘Yep’ in one take, the note will have every letter from A through Z next to the line.

I’m not trying to make you nervous; I’m telling you this so you can understand your role in the context of the people working with you. Of course, you’ve been told, “the engineer makes you sound good so be nice.” Being nice is good, but understanding how you can make everyone’s job easier is what makes you look conscientious and professional.

So how do you use this information? Remember that everyone’s job is easier when communication is clear. When your voice becomes a visual, you’re actually communicating visually with the editor, who is looking for neat sets of three clusters that look like they could be siblings—your ABC takes from before!

If you get flustered, breathe. You’re good. When you don’t second-guess yourself and you take a second to adjust, it shows up as short blank space. That’s something the whole audio team can read much easier than a bunch of partial reads. It’s just one take, and there’s always another take coming.

Remember when you’re in the booth, your only job is to act—but thinking ahead, and communicating clearly goes a long way.