This month’s Talent Spotlight is Leah Brown! Leah enrolled with Such A Voice (SAV) in April 2014. She had one-on-one coaching with Jan-Haley Soule and took classes with Sara Sherman. Throughout the voice-over process, Leah has learned that success in this industry is measured by how much time and work you put into training your voice. Let’s see what work Leah has done since graduating from SAV. 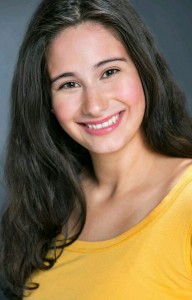 SAV: We appreciate you taking the time to talk with us. So, tell us all about your voice! How would you describe your sound?

Brown: You’re welcome! Thank you for having me! I would say that my voice is youthful and sweet.  I mostly audition for characters that  are either teenagers or cartoon voices. Those are the ones that I am the most drawn to.

SAV: Was it always your dream to be doing voice-overs? What led you to this industry?

Brown: In a way, yes! Growing up, I loved Disney. When YouTube became a thing in my teens, I was seeing YouTubers doing imitations of Disney princesses. I became obsessed with trying to do voice-overs and impressions of princesses and cartoon characters. I loved theater in high school so any form of acting was my passion! Voice-over became a hobby of mine and still is (today, I use Smule Sing to do many Disney songs and voice-overs). When I was around 20, my mom told me she thought she had found me my dream job. I was a little skeptical because I was very stuck on what I wanted to do with my career. She showed me a site called Voices.com. I started to read it and it looked amazing! I couldn’t believe that I could potentially get paid to speak and act with my voice. I was beyond interested and signed up right away.

SAV: What was your inspiration or push to start the program through SAV?

Brown: One day in the winter of 2015, I opened up an email from Voices.com that said that a voice-over coach was going to be in Wauwatosa, WI and that I could sign up to meet him. I was thrilled at the idea of getting some coaching, finding out how to go further in voice acting, and making it into a career. I went to the class and it was invaluable. At the end, the coach said that he was going to listen to our voices and give us a call the next morning with a yay or nay on if we should pursue a future in voice acting. I really appreciated his honesty. He wasn’t misleading any of us if he felt that either the voice or the passion was not there for us to advance. Naturally, my stomach was in knots when I left and I was on pins and needles hoping that he would give me a thumbs up.  He sent me an email later that night and said that he was very impressed with my voice and said that I was the best in class. I was both shocked and honored. It’s one thing to tell yourself that you have the drive and passion for something and that you’ll be successful at it.. But to have a professional confirm? Well that’s the best feeling in the world! 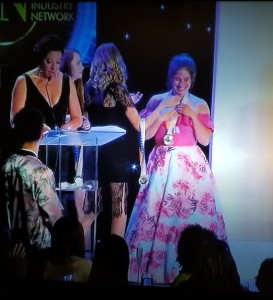 SAV: Did your coach help you overcome any specific obstacles?

Brown: Jan is the best! I cannot say enough good things about her. Jan helped me get over my self-doubt.  She helped me get out of my head and look at the script for what it is. She taught me to study the script that I’m given and to see what either the narration, story, or commercial is trying to say. It takes a bit of time, but the end result is priceless. You find that you naturally read with more purpose and accuracy. She helped make this much easier for me, to where it is now my first instinct when looking at a script. Also, Jan showed me the places to go to search for jobs and potential agents. She is so kind in saying that I can always email her if I have a question. I am honestly so happy that Jan was chosen to be my coach, she is a gem! I went out to LA this summer to meet with agents at an event called The Industry Network. The most important award that mattered to me was the voice-over award. To my surprise and blissful excitement, I received 1st place in female voice-over! I got quite emotional, tears and everything because in the back of my mind, I knew that my schooling, training, and passion had paid off. It was a moment that I’ll always remember. The second best part of this story is that the next day, Jan met me and my mom at the Westin hotel. We chatted all about voice-overs and we were able to catch up on how we were both doing. It was a lot of fun!

SAV: What do you think the hardest part of voice acting is?

Brown: So far, it has been booking jobs. You have to audition for quite a few gigs before you catch someone’s ear. When you do get a job, it’s very rewarding! But sometimes you have to throw your bait out in a lot of places before you catch a gig. And that’s okay. You are getting more experience, practice, and exposure every time you audition. There are times that you may not get a job, but the client may tell you that they love your voice and will keep you in mind for future projects. Every time you speak into that microphone and send it out, it’s one step closer to potentially getting a job.

SAV: What voice-over work have you done so far? How did it go?

Brown: I have done an E-Learning program where I portrayed three different children’s voices reading the same script. That one was quite fun! There was a lot of going back and listening to the other voices and making sure that there was a clear distinction between the three. Another was for a law firm in New York. I was a teenage daughter telling her dad how disappointed she was in him that he had committed fraud. This one was great because I got to skype with the owner of the company and he let me know exactly what he was looking for in the voice. A great compliment you get when you are hired is the talent agency telling you that your voice and acting was exactly what they were envisioning. That’s a great feeling! I also read for a homeschool social studies program about neighborhoods, families, and the environment. Lastly, Most recently,  I read for a medical study and played the role of a girl in college named Jenny that struggled with anorexia. I really enjoyed this one! I skyped with the man that hired me and he directed me through each scene. This one was very rewarding in that I really got to feel my character’s emotions and learn more about the issue of anorexia. It was a very memorable role.

SAV: What is your dream voice-over job?

Brown: My number one dream is to be a Disney princess voice. I read a book a couple of years ago called ‘Disney’s Aladdin: The Making of an Animated Film’ and there was something that Linda Larkin, the voice of Jasmine said. I cannot remember her exact words but she said something along the lines that she knew she was going to be the voice of Jasmine because she had dreamed of it ever since she was little and that she wanted it more than anyone else. That really stuck with me because I knew exactly how she felt. She believed in her dreams, worked hard, and got to be one of the most beloved Disney heroines. As Walt Disney said: “All our dreams can come true, if we have the courage to pursue them.”

SAV: Who is someone in this industry that you look up to?

Brown: Linda Larkin (Jasmine) and Irene Bedard (Pocahontas). I love that they did voice-over for these Disney characters. They were great role models to many young ones and they have humbly stayed out of the limelight in real life. I believe that when you truly love voice-over, it isn’t so much about the fame that you get out of your voice being on a commercial or the voice behind a cartoon character, etc. It’s more about  doing what you truly, truly love.

SAV: Do you have any advice for aspiring voice talent?

Brown: If you love voice-over, keep going! Always keep improving and learning what your voice is capable of. Be yourself and show each client or agent who you  are and no matter the outcome, be happy for yourself that you had the courage to go out there and reach for your dreams. Know your voice too. Recently, I had a huge compliment given to me. I was doing an audition in Minnesota for Joey Paul Jensen. She is a casting director for cartoons and movies (she told us that she had been with Nickelodeon for 20 years and Disney for 10 years), but in particular she had been a casting director for a number of seasons for Hey Arnold. That literally was my favorite cartoon growing up, so I was excited. I went in for my audition, did a commercial and a scene, then sang a song for her. After I had finished, she leaned in her seat, took a pause and said, “I don’t ask this question often, but have you ever considered going into the cartoon industry? Because you have a perfect voice for cartoons.” I was so taken aback and shocked because this talent agency I went with was primarily for commercials and TV shows. She went on to say that I had a youthful sound to my voice that she didn’t hear often and that I should pursue that. I went on to tell her that it was my dream and she was so pleased. To hear Joey, someone who has over 30 years of experience in the cartoon industry tell me that I had a shot was incredible! If you know that you have a unique voice that you have to offer, always, always believe in yourself and your ability.

Brown: Sincerely, thank you for having this schooling. From doing coaching with Jan to having the opportunity to do one-on-one coaching with Sara Sherman, the information and knowledge that you get from doing schooling with SAV is invaluable. I am so grateful to be with your company and I love everything that you do! Thank you.