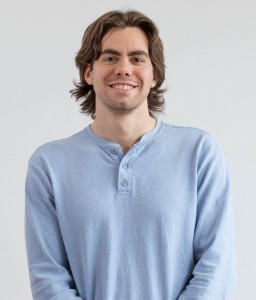 This month’s Talent Spotlight is voice-over actor, Connor Hough! Connor first attended an informational session in November 2016 by one of our voice-over coaches, Wendy Shapero. After the session, he decided to sign up for the Such A Voice Accelerator training package and took classes all throughout December and into January 2017. Voice-over coaches Dave Tolar and Angela Castonguay gave him the proper techniques and helped him record his voice-over demo. Let’s catch up with Connor and see what he has been up to since graduating from Such A Voice.

SAV: What inspired you to get into voice-over?

C: Well, I am a working actor (primarily in short films at the moment) and I was always curious about commercial narrations. I thought that getting some quality voice-over teaching and experience would help to add another facet to my ability and skill as a performer. I decided to look for voice-over classes in my area in order to increase my acting repertoire.

SAV: The industry can be incredibly daunting to an outsider, what was your inspiration to start the program at SAV?

C: Yes, it definitely can be. I’ve learned that there is never really going to be a “right” time to do anything. If we all waited for the “right” time, we would never take the chance because we would come up with as many reasons as possible to not take a big step or a risk. I had the money saved up to enroll in a voice-over program and I knew that going through it would pay off in the long-run because I would have the training and knowledge with me for any audition that I attend. This is training that is going towards my overall craft of being a voice-over actor and artist, so I knew it would be valuable regardless of what jobs I booked or how soon I booked them.

SAV: What are some things you took away from our program that you apply to your career today?

C: Dave Tolar taught me a nice technique that is so vital to connecting with the material. It was about the “moment before” visualization. This is when you specifically think about the moment leading right up to when you read your first voice-over line. Doing this visualization helps you really get into character.  In my experience, I have found that it is definitely harder to connect with the script material in terms of thinking about who you are representing as the narrator and who your advertisement is speaking to than it is acting on camera. The “moment before” helps you get into your role as naturally as possible. Thinking about the exact moment right before the first scripted dialogue is a little thing that is very underrated and can often be overlooked.

Another big thing that I will always remember is to SMILE! When you recite a line from a script without smiling and then repeat the same phrase with a smile, there is a very noticeable difference in tone and delivery of the message. Always end voice-over sentences with a smile! 🙂

SAV: Do you have a niche or type of voice-over you are most suited for? Say Audiobooks vs Commercials?

C: I absolutely do have a voice-over niche. I’m always told by people who hear me on the phone before meeting me in a person that I have a young, energetic sounding voice. As a voice-over actor, I’ve learned to fully commit to different characters that are realistic of my age(27) with a lot of real vibrancy. Therefore, I definitely lean towards doing commercials where I’m portraying a typical person or character or sounding as natural as possible with inflection in my voice. So knowing that, I audition for voice-over parts that call for the “every-man” type of role with my natural, personable, and upbeat energy.

SAV: Tell us about your recent work that has been published on the web.

C: The most recent voice-over job that I did was for Mercer University at the beginning of January. I use several free casting websites where they list acting and voice-over auditions. I found this job through Mike Lemon Casting, which is located in King of Prussia, PA, which was close to where I currently live in Philadelphia, PA. I typically get email notifications on new posts and I saw this listing for Mercer University. The client was looking for a male in their 20’s/30’s with an older-brother type of approach, someone who would be talking to current first-year college students and informing them about how awesome this school is. This literally fit exactly what my “type” is, so I read the script that they provided and submitted my audio recording. About a week later, I got an email from Mike Lemon Casting’s office saying that their client would love to book me for this social media ad. Shortly after, I was scheduled to have a two-hour studio session in Philadelphia to record the script for Mercer University. This video can now be viewed on YouTube, the title is “Your Mercer Story: Anything but Typical” and my narration starts 34 seconds into the video.

SAV: What other voice-over work have you done so far or are you looking to get into?

SAV: What do you think is the hardest part of getting into voice acting?

C: The hardest part for me was getting used to listening to my own voice multiple times for an audition. A lot of people hate to listen to their own voice but you have to get comfortable with it, there’s no way around that. Listening to a recording of yourself over and over is awkward at first, but it is very beneficial. You can find out what’s working well and what isn’t.

Remaining confident can also be a struggle when first trying to get into voice acting. You really have to believe that you CAN do voice-over work and that you’re capable of providing the type of delivery that fits your personality/niche. There IS a client that wants you, and they’re out there somewhere. The key is defining what makes your voice special, specifically identifying what things you can offer individually as a voice-over artist, and then bringing that to the table in an audition/reading. The rest of the journey will come naturally.

SAV: Do you have any advice for aspiring voice talent?

C: This goes along with the confidence factor. You must believe in yourself that you have the capability to become a voice-over artist. Not everyone is going to be a Morgan Freeman or James Earl Jones type of narrator, and that is not a standard you need to set for yourself. There are so many types of voice-actors and different roles out there. But if you don’t believe in yourself and your voice, prospective clients will sense that and perhaps hire someone else. For success, it’s all about how you convey yourself, how willing you are to learn and take criticism, and how persistent you are in keeping a positive mindset when voice-over jobs aren’t as frequent.

But the bottom-line is that you really have to love doing it and enjoy the process!

You can find out more about Connor by checking out his professional website,  www.connorhough.com.

Did you enjoy this interview? Be sure to check out our past Talent Spotlights!